Home / Blog / How are Hospitality Employees at Greater Risk for Unconscious Bias?

How are Hospitality Employees at Greater Risk for Unconscious Bias?

More than 70 percent of foodservice employees surveyed in a recent study exhibited some form of unconscious bias, according to the Harvard University/Project Implicit study, reported in Nation’s Restaurant News. That percentage ranked foodservice third (out of 12 industries) for its level on unconscious racial bias. Unconscious biases are social stereotypes about certain groups of people that individuals form outside their own conscious awareness.

Not only can employees’ biases affect customer satisfaction in both the restaurant and hotel industries, they can alter a company’s bottom line. 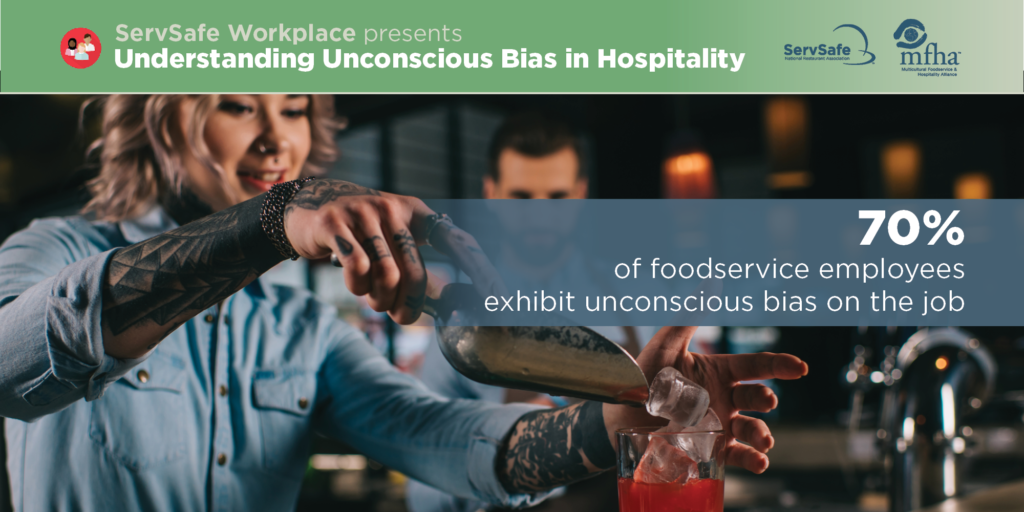 Why Is the Hospitality Industry at Greater Risk?

“I would say things like gratuities impact that,” says Gerry Fernandez, president and founder of the Multicultural Foodservice & Hospitality Alliance. For example, “employees often have bias based on the perception or the experience that this or that group is more or less likely to give a gratuity,” he adds, noting that travelers visiting from Europe, where tipping is not the norm, are often seen as customers who generally don’t tip well in the U.S.

“There is also racial, cultural, social, and economic bias,” says Fernandez. “Two women dining together, young people, and older people may be assumed to not tip well,” he explains. Other common assumptions? “White men in suits give tips. Those who use a credit card give tips. Business groups give tips,” he says. “So that would be where I see that play out.”

“Another reason gaffes in customer service are much more obvious in food service and hospitality is that they are more clearly seen,” says Fernandez. An individual or a group gets seated in a less-desirable section of the restaurant. They don’t get waited on promptly. At a hotel, they may be given the noisy room next to the elevator while the person checking in next to them gets a better room, he explains.

Racial Diversity in Both Staff and Customers

How does the combination of having a racially diverse workforce, combined with a racially diverse customer base, potentially lead to unconscious bias? One common example is customers having bias against franchisees, whether for hotel or motel chains or restaurant chains, who come from a common ethnic background, says Fernandez. He gives the example of a customer noticing that a number of South Asian Indian people operate hotels in certain franchises. “To some people, they are a perceived minority,” he says. “Some customers say ‘I don’t know if I want to stay there.’ In so much of franchising, that becomes an issue.”

This can also happen if the franchisee is of a different religion, Fernandez adds, noting “I don’t think you get so much of that with customers who have more experience, more education, who have seen more of world. They are more accustomed to seeing people from different cultures and races.”

While education and broader cultural understanding can have a positive effect on a customer’s biases, it can also benefit employees — and the bottom line for a business. A study by McKinsey & Company reported that profitability in operations with more diverse executive teams can be up to 30 percent higher than in businesses with less diversity. The example of diversity at a company’s top tiers spreads throughout an organization’s culture, with positive benefits for both profits and in happier employees and guests.